Our research uses ultra-cold atoms and molecules to learn about the physical processes that permeate our world.

We are specifically focused on the physics of quantum information, which includes advanced sensing, simulation, and computing applications.

We use gas and liquid phase atoms and molecules as tiny computers to perform tasks that cannot be simulated on classical computers. Our approach is to focus on novel species and novel ways to control them to leverage the built-in "quantumness" of these molecules for higher performance in these applications.

Dec 7, 2022: Organic alkaline-earth-metal oxides have been identified as promising species for quantum information and precision measurement applications that require repeated spontaneous photon scattering. In parallel with closely-related work by the Doyle group investigating CaOPh, we have taken a high-resolution, continuous-wave laser absorption spectrum and shown that the vibrational branching fractions in these speceis are high enough for some of these applications. This work recently appeared in JPC Lett. 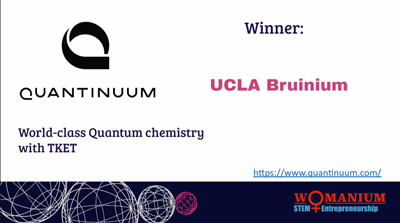 Sept, 2022: The Womanium Quantum 2022 Global Quantm Hackathon was held in August this year and a UCLA team with Campbell Group members Changling, Amanda, and Lambert won first place in their challenge group for the "World class Quantum chemistry with TKET challenge." The team also took home the runner-up prize for startup potential (out of nearly 200 teams). Congratulations, UCLA Bruinium!

July 25, 2022: Spontaneous emission can be used for state preparation and readout of individual atoms and molecules so long as it can be repeated enough times for the detector to "click" before the molecules get bleached to another state. In collaboration with the groups of Eric Hudson, Anastassia Alexandrova, Justin Caram, and John Doyle, we have recently demonstrated (in a recent paper in Nature Chemistry) a class of large molecules that appears to have this property, thereby extending the reach of this technique to species large enough to contain carbon rings.

March 2, 2022: The mechanical damping of the translational momentum of gas-phase molecules known as Doppler cooling can trace its origins to a classic experiment by Otto Robert Frisch. There is, however, also an angular counterpart of Frisch's experiment that was performed only a couple of years later by Richard Beth. We have recently found that there is accordingly an associated Doppler laser cooling process that can cool the rotation of gas-phase molecules using photon spin. In fact, both cooling methods are the same when described with the right framework, and we show that it may be possible to laser cool molecular rotation to sub-milikelvin temperatures.